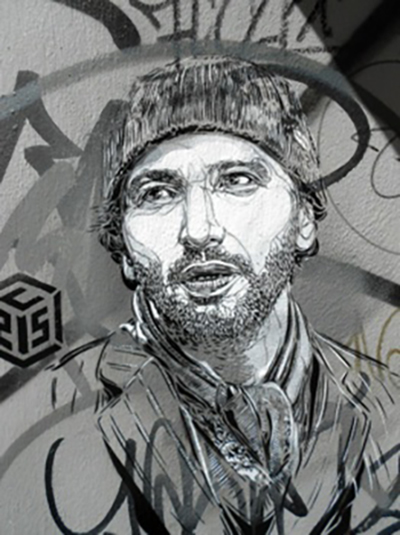 Christian Guémy, aka C215, is a French urban stencil artist born in 1973. He graduated in Foreign Languages (English and German Bachelor’s Degree) from Sorbonne University and in History (Master’s Degree in History, Master’s Degrees in Art History and Architecture History). He began his artistic career by publishing his poems under the pen name C215.

Christian Guémy has been working in the streets all over the world since the early 2000s. His works painted on objects or on canvas are exhibited in several galleries, both in France and abroad. He has exhibited his production in many national museums and he regularly collaborates with public, cultural and social institutions. This year, he mainly presented the exhibition “Shadow and Light” at Paris Invalides’s Musée de l’Ordre de la Libération as well as at the Maison Aragon-Triolet (the exhibition titled “Autographs”) and at the Musée Champollion (“Egyptomania” exhibition). Nowadays, Christian Guémy is considered as one of the most recognized stencil artists on the global Street Art scene.

Committed to the defense of French republican values, his work questions the collective memory and pays tribute to exemplary or heroic achievements. Christian Guémy was awarded “Knight of the French Order of Arts and Letters” by decree of the French Minister of Culture on September 16th 2019.

« C215’s art captures a light, depth, and humanity that is difficult, and rare using stencils, his chosen medium. Stencils tend to flatten images and make them static, but C215 has developed a style of illustrating and stenciling that yields an impressionistic illumination of his subject’s character. Even though his technique is meticulously refined, C215’s work transcends the formal and seems to get to the core of compassion and belief in the human spirit. Encountering C215’s pieces on the street is always makes me happy »